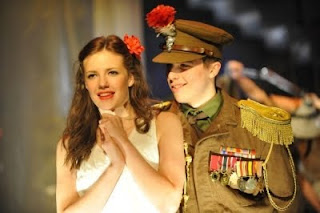 In this production of Buchner’s Woyzeck, Nottingham Playhouse Youth Theatre have torn off a grisly chunk of German theatre history, chewed it, swallowed it, and for the most part digested it very well. A difficult and altogether unsettling play, Woyzeck is a quirky choice for an amateur company; it is abhorrent in the extreme, with sex, surgery and fascism all playing leading roles. I could almost describe it as a Nazi-Othello-Nineteen-Eighty-Four hybrid, but I’ll try not to. I myself was unfamiliar with the play, and possibly would have found this production far more confusing than I did had I not researched the bare bones (cough, googled it) prior to seeing it. Because of its difficult start in life, (Buchner left it unfinished at the time of his death in 1837) the play can easily appear disjointed, but NPYT and their director Sarah Stephenson did a very good job of portraying the story, at least to an audience who had a vague notion of the tale.

Now introductions have been made, down to business...

The play started off with the actor playing Woyzeck running arse-over-tit into the middle of the performance space. I immediately cringed at the potential for melodrama, and if I am brutally honest, this feeling didn’t entirely leave me until well towards the end of the first half. Woyzeck (James Somerville) was well cast physically, a painfully thin and sunken eyed youth, but I didn’t feel that he invested as much emotionally in his part as he could have done. Much of his dialogue came across as a bland monologue due to his reluctance to respond to other characters, and this made him difficult to empathise with. I understand that this detachment could be seen as an example of Woyzeck’s disturbed mental state, but if it is to be understood as that, I would like to have seen more variety in Somerville’s performance, as his ‘detachment’ was present from first line to last, and as for his descent into madness, well he failed to descend and his reaction to Marie (Kate Walker) and the Drum Major (Kane Oliver) felt contrived. Although Somerville had some moments of great subtlety, that from my seats in the front stalls, I was grateful to be party to, I do think he was one of the weaker actors in the company and all-in-all was an unlikeable Woyzeck who commanded very little from the audience.
Despite this, the cast had such a number of strong actors who hit the mark and excelled in their roles, the weaknesses soon healed up like a wound. The production was successfully buoyed up by the likes of the Sergeant (Charlie Hayes; a young man in possession of impeccable comic timing and ability) and a phenomenal young actress who played a variety of parts but was the life and soul of the chorus; my eyes were constantly drawn to her as she slid from one role into the other without a hitch.

Discussions with other theatre goers proved unanimous that the direction and design for the production was incredible. Physical theatre and music were huge components, and for me, they worked perfectly. The actors were highly rehearsed, completely involved with one another and threw all the right shapes in all the right places. I particularly like, and slightly resent (given that I cannot for the life of me get it out of my head) the perverse use of ‘the teddy bear’s picnic’ as the haunting overture, and the use of the cast’s musicality; (the actor playing Andres performed an impressive acoustic guitar and song solo, whilst a few of the girls showed off their beautiful voices at different, and totally appropriate points of the production.) NPYT are very lucky to have access to the expertise of the Playhouse’s props and scenery department, and the darkly beautiful design, scenery and lighting alike, gave the production the final professional touch it needed. Although the production was performed in a very Brechtian manner, the scenery was a little way away from the bareness we associate with Brecht’s theatre, set in a basement laboratory with tiled walls and ominous looking buckets and contraptions littering the stage. The use of puppets was brilliant, and the young cast dealt with the challenges of puppetry and setting their own stage in a way that rivals many professional companies.

Altogether, NPYT’s Woyzeck was impressive, depressive and sickening; all the things a good tragic play should be. Amateur theatre is sadly renowned for its hit, and (more often than not) miss quality, however I am pleased to say that although performed by an adolescent cast, amateur becomes a dirty word when referring to Nottingham Playhouse Youth Theatre’s production of Woyzeck. They came, they chewed, they swallowed.
Written by Holly Boyden at 00:02